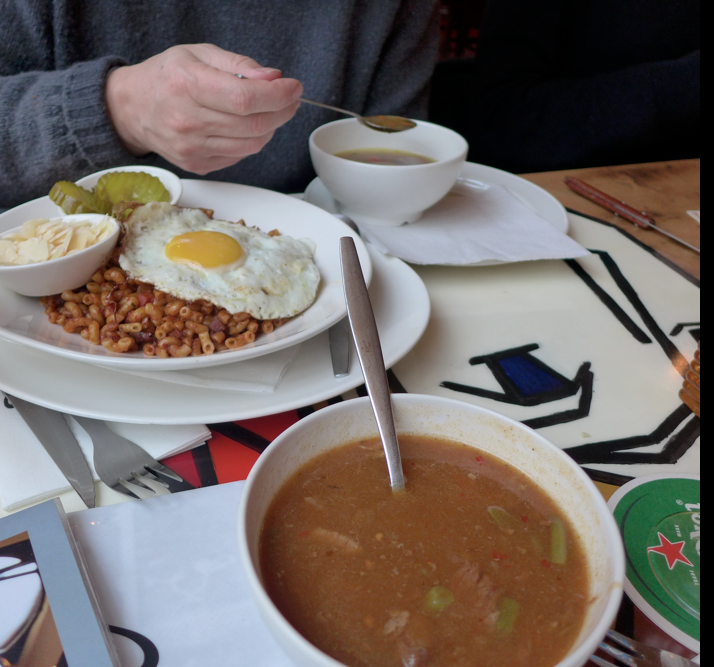 The Dutch traveled the 7 seas, taking over the world, and yet, nobody ever talks about their cuisine. Except the French, who consider Holland the second greatest cheese producing nation on earth. I probably researched Dutch cuisine on my first trip, decades ago. I know that pea soup is one of their national dishes, pickled herring is a big deals and that pancake houses are common, even in the remote countryside. But beyond that, I remember very little and local cooking doesn’t seem to be a favorite, even among the Dutch, who spent the colonial era amassing colossal fortunes, importing spices from across the globe, making Amsterdam a feast for those craving a bit of international cuisine.

At the end of our extended weekend, Em looked at us and declared this to have been our very best trip ever, at least as far as eating out was concerned. She loved every meal. But really loved them! Ironically, we had planned very little and seemed to have stumbled upon one excellent place after another. 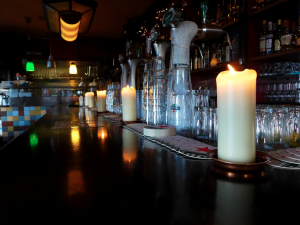 For lunches, we were always lucky enough to find acosy Dutch place filled with locals enjoying their pea soup, thai or italian inspired salads and the ubiquitous bread with ham, melted cheese and eggs. In France, the last dish would be called a Croque Madame, and the Dutch version was similar, but as effusive as the Dutch are tall, with tons of cheese and eggs spilling over up to three slices, of fresh, delicious bakery bread. We had lunch at three different cafés, all within a block of each other (between our hotel and the museum district). We were all as enthusiastic as Em about our meals, if slightly less surprised to have found great food where ever we went, even if the meals would never earn international acclaim. Probably because it was something we value more;  undeniable authenticity!

Café Binnen Buiten – This place feels like a pub, decorated in dark woods and traditional wainscoting. Locals were playing a game of backgammon to our left, behind us neighbors had come in just to share a drink amongst a relaxed lunch crowd eating by candlelight. One man was so relaxed he used his fingers to wipe his bowl of potato chip dip clean!

Café Loetje -Sunlight floods in from the large glass enclosed terrasse, highlighted the artist decorated table tops of this old fashioned café. The bathroom signs are in their original stained glass, the light fixtures from another era. And while there were plenty of locals, there also seemed to be a lot of Dutch tourists having made their way, guidebook in hand. 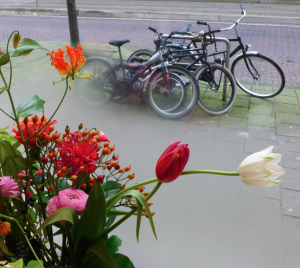 Near the museum, The Corner Bakery inspired my little still life

The Corner Bakery – As small as a bread basket, this modern little bakery features freshly baked breads, a few cakes and French confiture. There are a few tables upstairs and a large common table in the basement where they feed hungry folk with light sandwiches and salads.

3 thoughts on “Amsterdam for lunch”